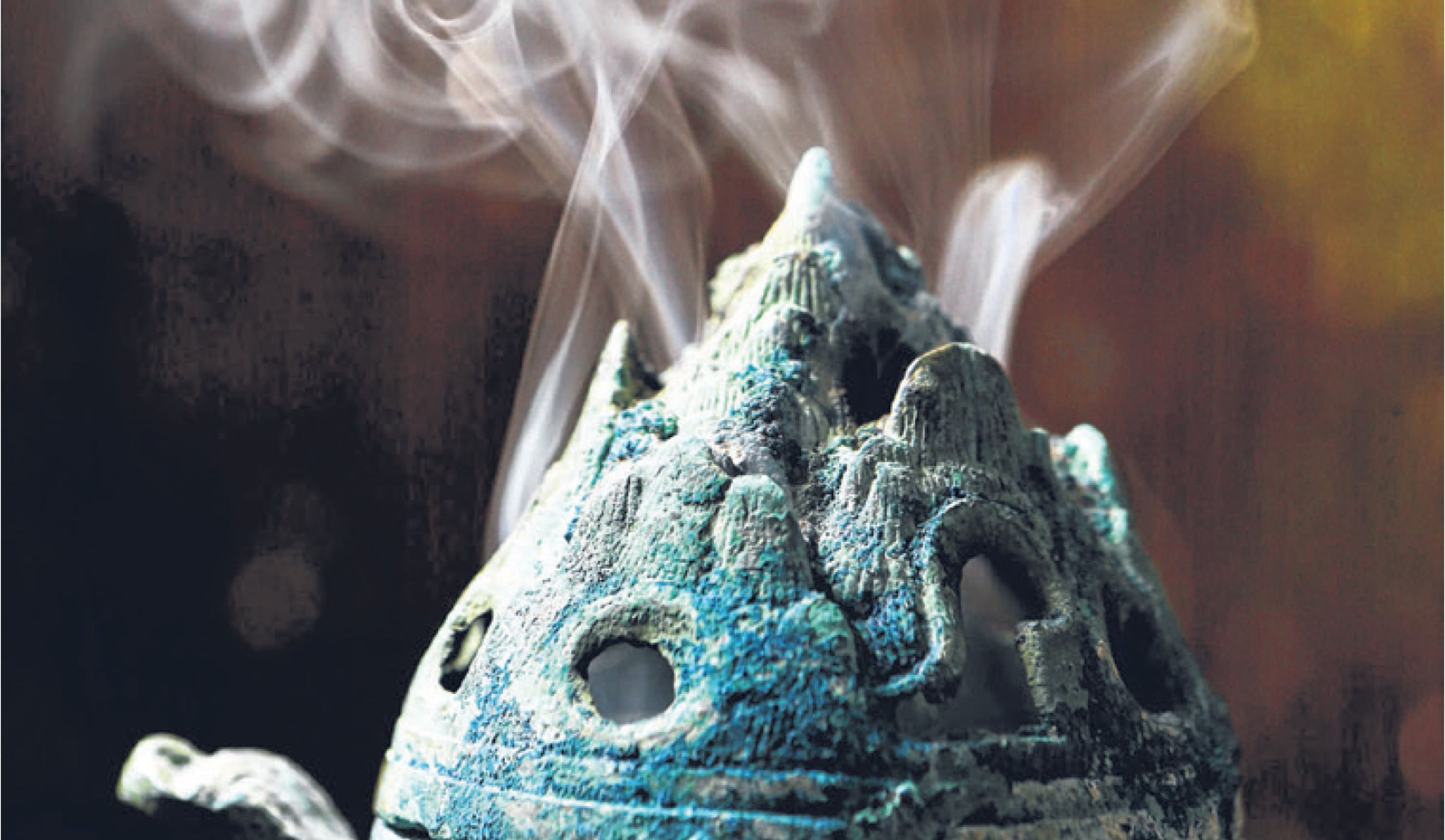 Brief Introduction of Our Incense

20 years ago, I had the chance to research on some medicinal plants when I was an undergraduate in the Department of Plant Science and my supervisor at that time was an expert on Qinghao (Artemisia annua). As we know, Qinghao is a kind of Chinese herbs and the atermisinin is one of the most effective medicine for treating malaria. When I searched for more information about Qinghao, I found that it was also used as a spice to be burned together with Chinese mugwort (Ai cao, Artemisia argyi) during the Dragon Boat Festival to get rid of evil and negative energy. 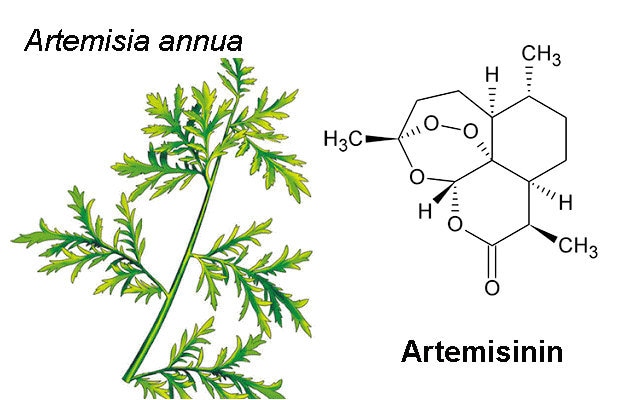 Since that time, I started my journey of incense and began to study the use of incense in different cultures and religions. Gradually, I realized that in our modern lives, we have lost the knowledge and wisdom of our ancestors about incense and I started making incense by myself in traditional ways. 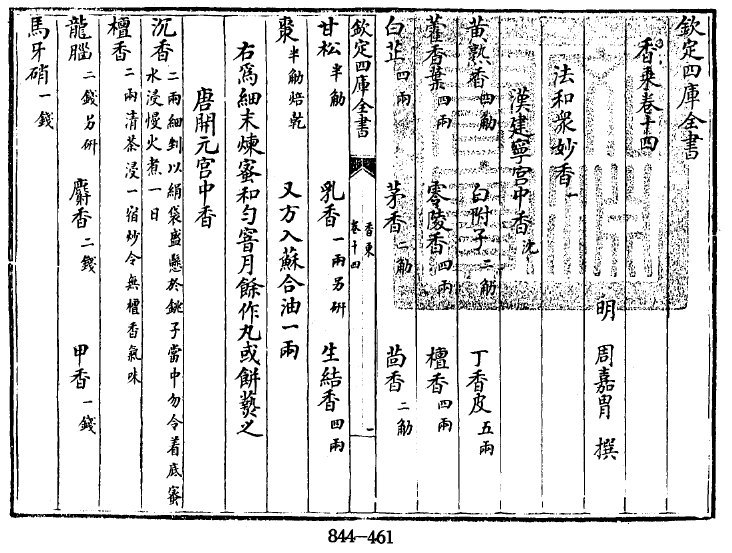 My incense is mainly divided into two categories, the processed aloeswood and the traditionally blended incense. For the first one, I need to point out that it is different from the agarwood incense on the market, in our philosophy, all spices are herbs including aloeswood and all herbs contain certain toxicity. The ancient doctors developed a series of technologies related with fire to process and try to remove their toxicity. These kinds of processing methods are called Paozhi (炮制) and the main purpose is for enhancing the effectiveness and reducing the toxicity of herbs. 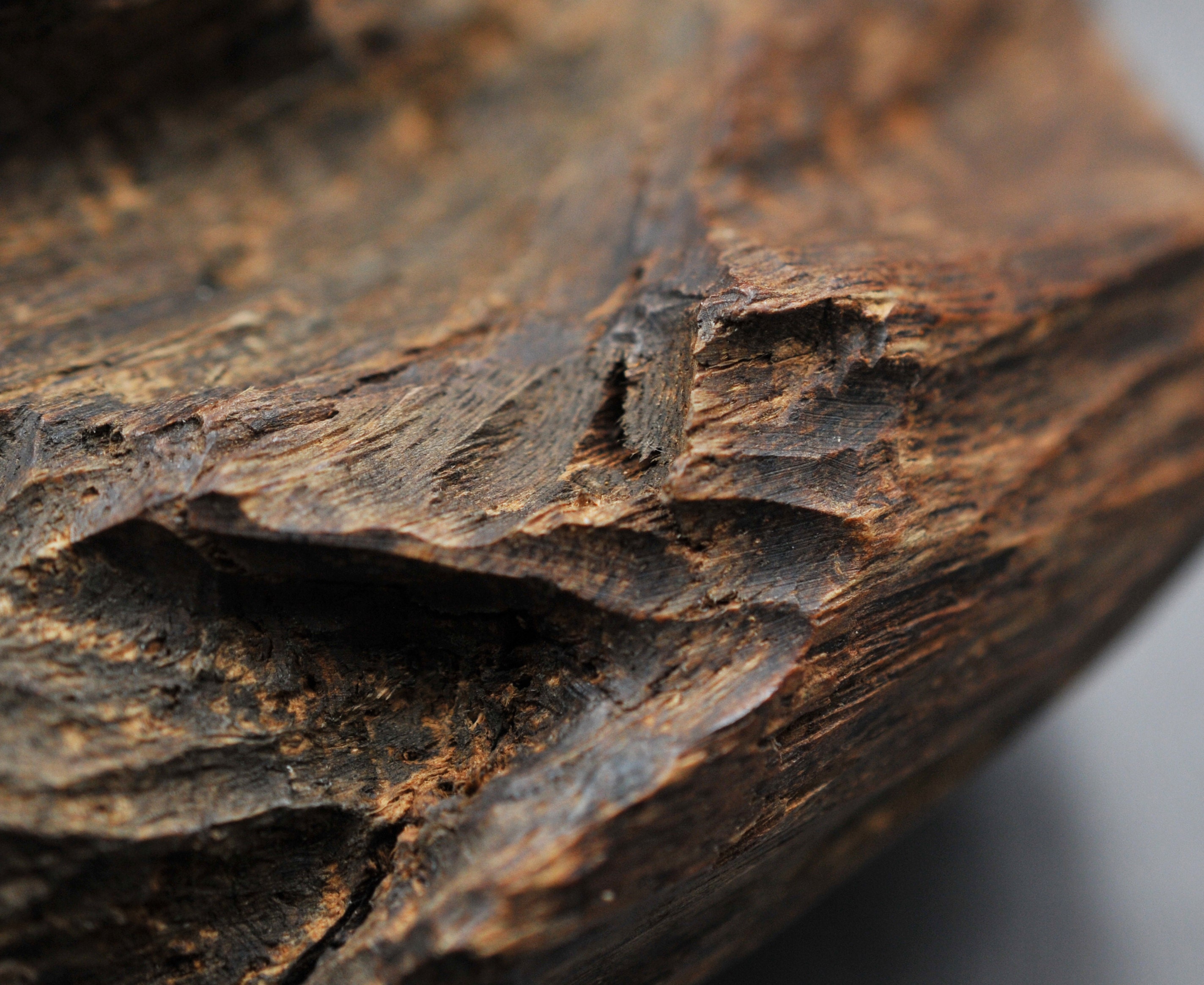 We all know that aloeswood trees mainly grow in tropical regions, which means the aloeswood contains too much fire element and it is harmful to our body. Since Tang Dynasty or earlier, our ancestors developed the method to process it and made it more suitable for us. Of course, the raw materials are all the top grade and selected from various areas. It is my most popular incense, and I believe that you will definitely love it when you try. 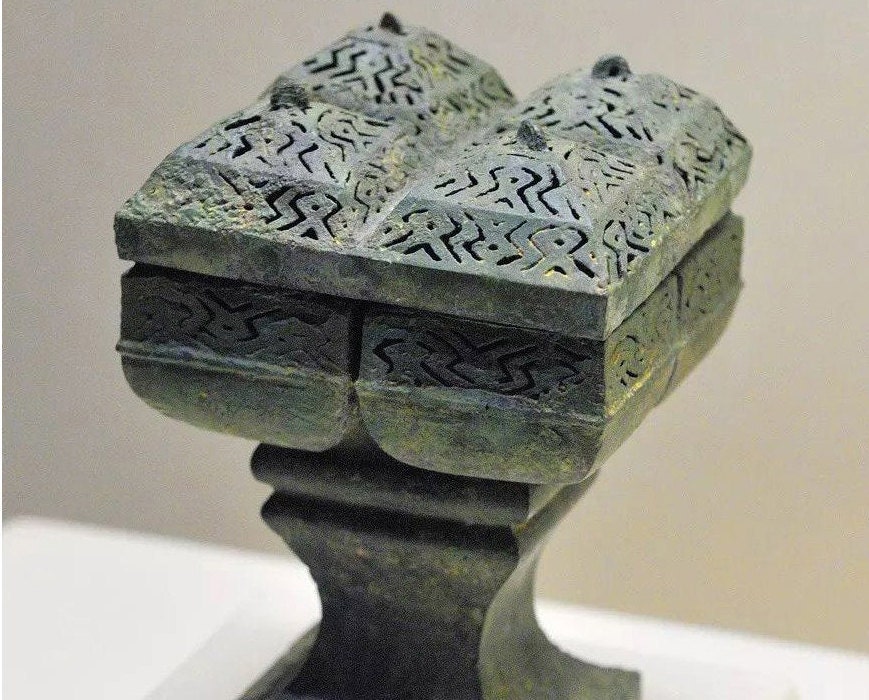 The usage of blended incense can be traced back to Han Dynasty (206 B.C. – 220 A.D.), and it is more complicated for this category, as each blended incense has its own recipe and function. In ancient times the incense was the favorite of the royal family for the following two functions: one was to bring them elegant and unprecedented experiences. Another was to promote the circulation of Qi and blood in their body to maintain health. These are the secrets or ancient wisdoms of our ancestors to utilize incense for thousands of years. I try to summarize and list my incense as following： 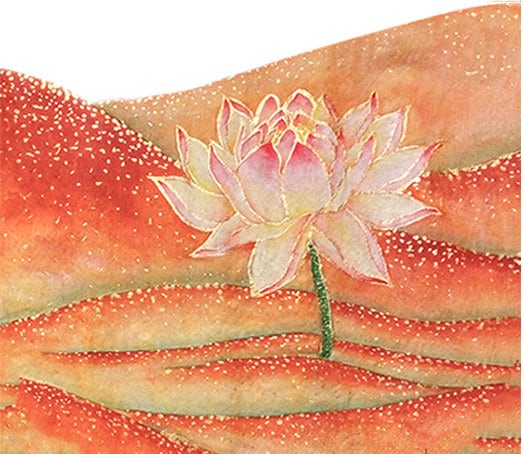 Glad to share with you one of my best incense. The recipe was created by a monk from Hua Zang Temple (华藏寺) in Ming Dynasty (1368 - 1644 A.D.). According to this recipe, all spices were processed in traditional ways and blended in special order. It perfectly mimics the holy fragrance of real lotus, when you burn it, you could feel many golden lotuses blossom on the ground one by one, amazing experience. 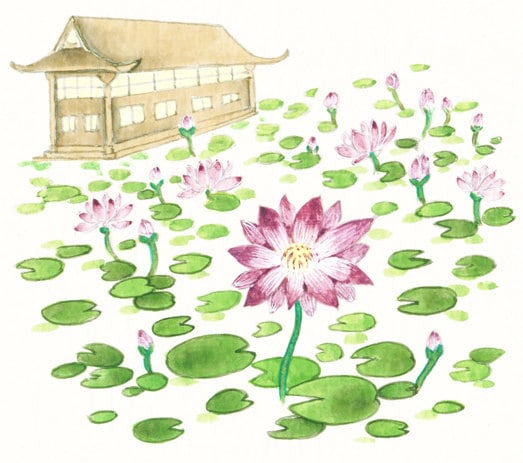 The recipe was created together with “Holy Lotus” from Hua Zang Temple (华藏寺) in Ming Dynasty. According to this recipe, all spices were processed in traditional ways and blended in special order. This incense perfectly mimics the fragrance of the real Blue Lotus, it’s so unique that you will never forget it since the first time you smell it. 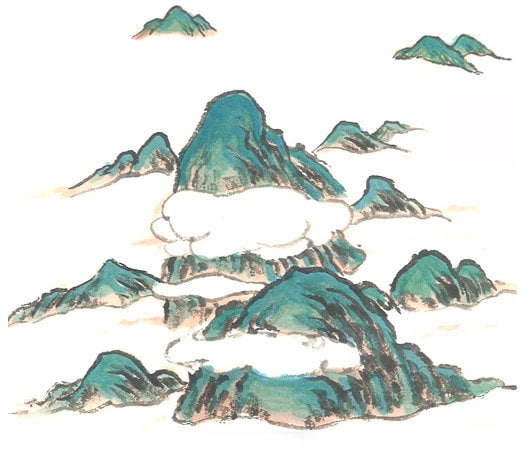 Another wonderful incense from Hua Zang Temple (华藏寺). According to this recipe, all spices were processed in traditional ways and blended in special order. If you like my "Holy Lotus", you should also like this "White Clouds", it's the aloeswood version but much more elegant. It makes you feel as if you are sleeping on the clouds, so ethereal and peaceful. 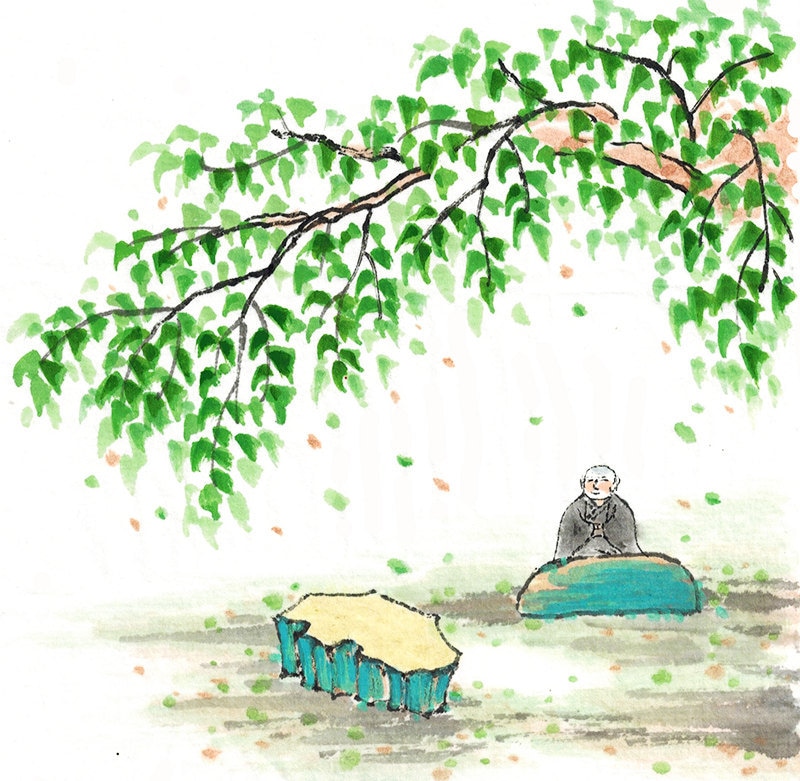 Glad to share with you one of my favorite incense. The recipe was created by a monk from Hua Zang Temple （华藏寺）in Ming Dynasty. According to this recipe, all spices were processed in traditional ways and blended in special order. If you like my “Blue Lotus“, you should also like this “Bright Mirror”, it's the aloeswood version but much more elegant.

“Bright mirror” is from a well-known Zen story. As described in this poem:

Our body is the Bodhi-tree

And our mind a bright mirror.

Carefully we clean them hour by hour

And let no dust alight.

It reminds that meditation is very important for us to clean our mind and body everyday until the final awakening. 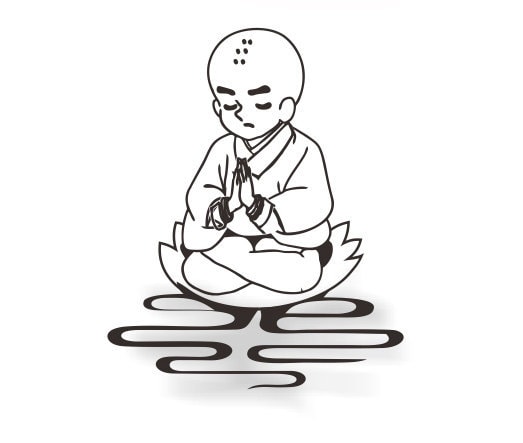 This recipe was from an ancient temple. The most interesting thing is that when you smell it, you could feel the Qi flowing along the Du Mai (Governing Vessel). According to ancient Taoist theories, it is very important to break three barriers (Wei lü, Jia Ji, Yu Zhen) and finally open the Governing Vessel during meditation. This incense can help us to open the Du Mai and greatly increase the Aura or Qi of our body and also help us enter deep meditation.

The data from Aura machine clearly shows that, after ten minutes of smelling Samadhi. The Aura from seven parts of our bodies increased 2-5 times. Other data also proved it is also very useful to prevent drowsiness, listless in meditation and our daily lives. 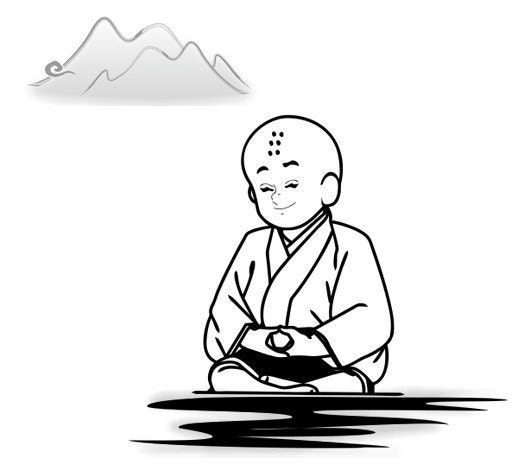 This recipe was also from Hua Zang Temple (华藏寺). All spices were processed in traditional ways and blended in special order.   The most important ingredient for this incense is Chenpi (Dried Tangerine Peel), as there is an old saying: One aged Chenpi worth one gold (百年陳皮勝黃金)". As known to all, Chenpi is widely used in food and Chinese medicine, but very few people know it is also an important spice for incense especially in Ming Dynasty. Recently, several research works have indicated the Tangeretin from it can effectively inhibit the replication and entry of viruses. It’s very useful in our daily lives. 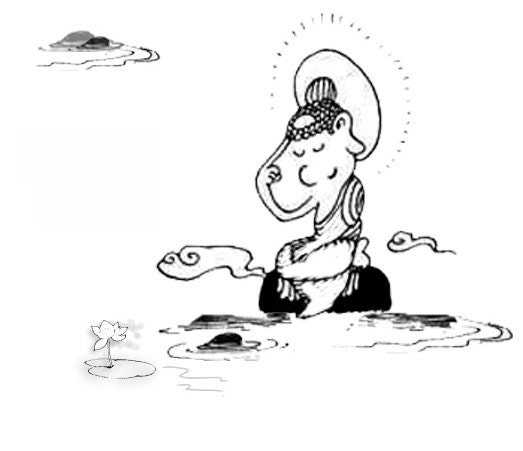 AMBERGRIS is the most mysterious spice in the world, which is produced by the Sperm Whale. When it is excreted and then floats on the sea for a long time, the color begins to change slowly. It turns from black to white and occasionally to the golden one. The fragrance also becomes mellow and soft.

Since the Tang Dynasty, the ambergris has been regarded as the most precious treasure, and only the emperor can use it. What is the Ambergris used for? It was recorded “(龙涎香)能发众香，故多用之，以和香焉”– The Ambergris can stimulate and improve the properties of other spices, so it is often used to make the blended incense. It is pointed out, the real function of Ambergris is to optimize and improve the fragrance and properties of other spices, just like the Harry Potter's magic wand.

Modern science also proves that when it is burned together with other spices, the fragrance will be changed completely. I also discovered this secret long time ago, when I was making incense. It could greatly make other spices softer and more dulcet.  Since then, I have started to research on how to use it to create the most wonderful fragrance based on the recipe from ancient temples. Finally, I have made this “Pureland” which contains the highest quality Ambergris. When you burn and smell it, there will be a pureland floating on the sea in your mind. 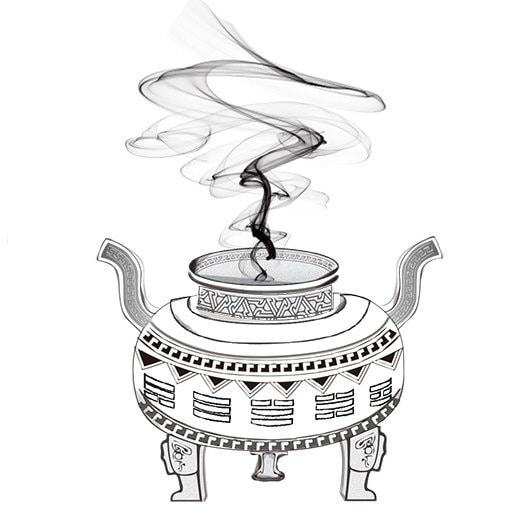 Incense is an important part of Taoism for thousands years, no matter it is to get rid of evil spirits or communicate with immortals, all carried out through incense. This is one of the traditional Taoist incense which is used to rejuvenate spirit. It's a powerful tool to wake you up when you feel tired and very useful in our daily lives.

“清神香”, the word “Rejuvenate Spirit” doesn‘t fully explain its meaning. In modern society, we are disturbed by all kinds of information anytime and anywhere, our Shen (神) is not at peace for a moment. This incense can remove the distracting thoughts that interfere with us and let our Shen return to a state of tranquility (清). As a result, you can work, study and live more efficiently with a clearer mind. It's not caffeine that temporarily stimulates and makes you more tired later. It is the pure Qi to nourish and make your Shen more powerful. 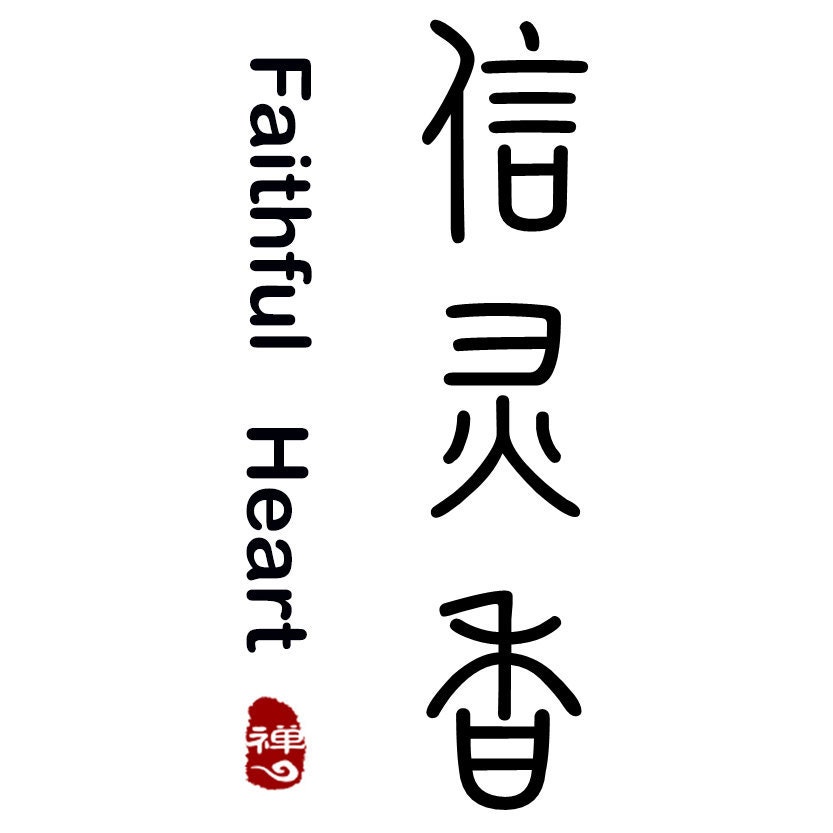 For the Faithful Heart (信灵香), “信” means believe, and “灵” means come true, once you have a faithful and determined heart that all your wishes will come true. This incense can make our faith stronger and not easily be disturbed by the outside world. In addition, it’s fragrance really good and one of my favorites. 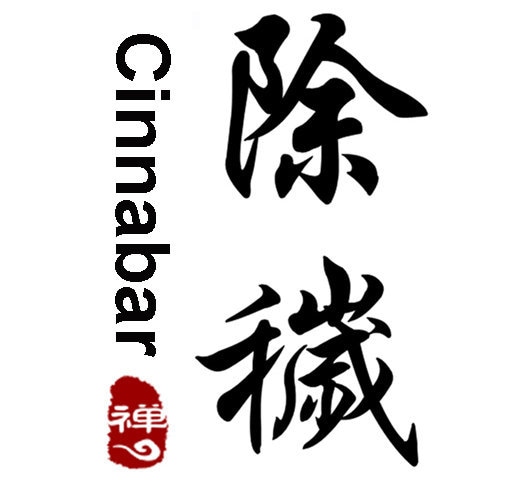 In history, incense is widely used to get rid of evil or negative energy.  Cinnabar is recognized as one of the most powerful and positive compounds to remove the negative forces and spirits for thousand years, especially in Taoism and Feng Shui. It was also a common ingredient of medicines being used to treat infected sores, scabies, ringworm and as a sedative for mania and insomnia since Warring States Period (475 B.C.). And in scientific research, six similar compounds have been proven to inactivate the Influenza Virus effectively. 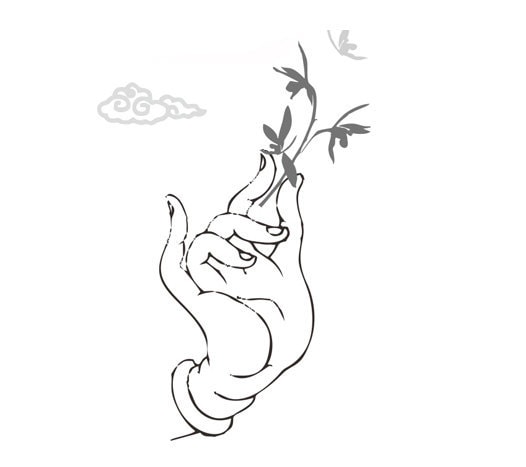 Smiling Orchid (笑兰香) is one of the most important incense for royal family. After it was passed to Japan, only the Emperor of Japan was eligible to use it. Till now, there are more than 10 different recipes can be found for this incense. The most interesting thing is that it contains musk. We all know that musk has a very strong animal flavor, but after processing and blending, it can even simulate the fragrance of orchids.

Musk (麝香) is not only a spice, but also a very important traditional Chinese medicine. Its main functions are to promote Qi and blood circulation. For this Smiling Orchid which contains musk, it specially promote the circulation in the Gallbaldder Meridian of Foot-Shaoyang (足少阳胆经) which is one of the Principal Meridians. The red line shows the path of this Meridian which starts from the side of our head and flows around ears and end at the foot. Abnormalities in this meridian often lead to migraines and tinnitus, after years of testing, the Smiling Orchid indeed has the effect of relieving the diseases related with this Merdian, similar as acupuncture but not so strong.

Human body is a small universe. In the philosophy of Traditional Chinese Medicine, the meridian plays similar role as river which guide the flow of Qi or energy to every corner of our bodies. If the flow is not smooth or blocked, illness or pain may occur. This is also how acupuncture treatment works, by suddenly stimulating the intersection of meridians to make the whole line flows smoothly again. As a result, the smooth state of the specific meridian is associated with healthy of related organs. 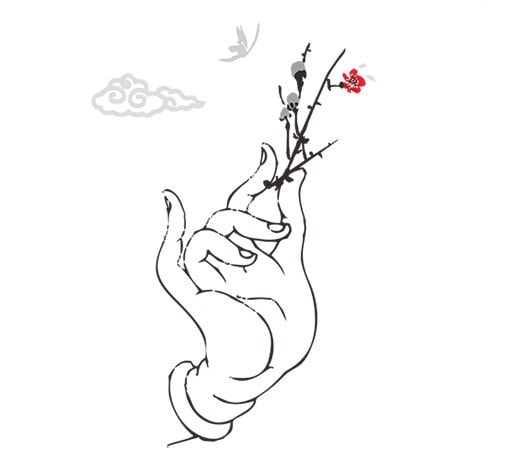 The Smiling Plum (笑梅香) is quite similar as Smiling Orchid but by using different ratios and processing methods, it transformed into a completely different, plum-like fragrance.

Human body is a small universe. In the philosophy of Traditional Chinese Medicine, the meridian plays similar role as river which guide the flow of Qi or energy to every corner of our bodies. If the flow is not smooth or blocked, illness or pain may occur. This is also how acupuncture treatment works, by suddenly stimulating the intersection of meridians to make the whole line flows smoothly again. As a result, the smooth state of the specific meridian is associated with healthy of related organs.